Register; see who else is riding.


In the UK (and elsewhere, for all I know), there’s an informal tradition of naming particularly hilly randoneés as grimpeur (“gram-purr”, French: climber) routes. I’m using the term a little ironically. Eastern WA doesn’t have high passes like the Cascades to the west, but this route visits the most notable summits local to the Tri-Cities, and climbs around 5,000 feet - twice as much as our regular “Flat Yak” spring 200 Km event. We will spend a substantial portion of the ride in the Horse Heaven Hills. Bounded by the Yakima valley to the north and the Columbia river to the east and south, and named after the herds of wild horses that used to roam here, it’s now land intensively farmed for wheat and wind. There’s the opportunity for awesome long-distance views from up here, south across the Columbia to Oregon, north across the Yakima valley, and on a good day you’ll have a simultaneous view of Mts Hood, Adams and Rainier to the west.

The ride starts on Road 68 in Pasco which is well-appointed with plentiful services. We head down to the river then take the riverside bike trail to cross the Columbia on the 395 “Blue Bridge”. Next we wiggle through Kennewick on some back streets, then begin the recently rebuilt climb up Clodfelter. From the top of Clodfelter (about 1850’) we begin the long, straight trip west across the Horse Heaven Hills. The course gently drops then climbs again before we turn onto Township Road. Then very soon the pavement ends and about 7 miles of dirt road begins. It’s well-maintained dirt and will be a problem only for particularly skinny and feeble road tires. This section also includes the high point of the ride (about 2000’) and the reward is excellent views and even less motorized traffic, if any.

We rejoin pavement at the junction with the Mabton-Bickleton road and head north down a fast but twisty descent into the Yakima valley. If you’re desperate for sustenance, the roadside burger joint and couple of bars might be open in Mabton (100Km, no grocery or convenience store), but if you can wait, options for refuelling are much better in Grandview (115 Km). The control at Grandview Safeway is hard to miss, but remember to leave on Wine Country Road (heading E), not the way you arrived (from the W).

Next it’s a quick stretch to Prosser, further optional services, then the steady climb up SR-221 (locals call it “the elevator”) to the Horse Heaven Viewpoint and info control. From the viewpoint we continue back east through yet more wheat fields until eventually arriving at the top of Webber Canyon - another local cyclists’ favorite hill. It’s a fast and fun descent on a good surface, but keep half an eye over your shoulder for occasional traffic creeping up on you. There’s a Conoco at the bottom in Benton City for refreshment. The last stage back to Pasco, beside the Yakima for a bit, through Richland, over the Columbia and back to Road 68 and the finish, is gently rolling - with any luck there’ll be a tailwind.

Warning:
There’s effectively no services of any significance until after the first half of this ride, at Grandview (115 Km). Please carry plenty of food and drink from the start. Bear in mind that, even in September, Eastern Washington temperatures can sometimes be in the 90s (sunscreen!). Up in the hills there’s little or no cover and if we’re unlucky the prevailing wind might be against us for the first 100 Km or so. 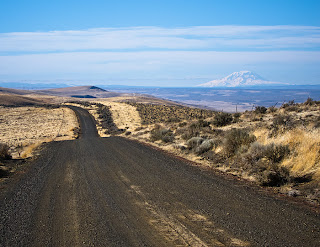