A 400km route concept is shown below. The route takes advantage of familiar (to local riders) routes, adventure-potential with the Naches-Ellensburg-Selah leg, has good services and a better than even chance of a tailwind for the last 50-100km. Details pending.

Each of these has the benefit of finishing with very accessible food/drink access, and very nice scenery. Opinions are solicited.
Posted by Paul Whitney at 10:06 PM No comments: 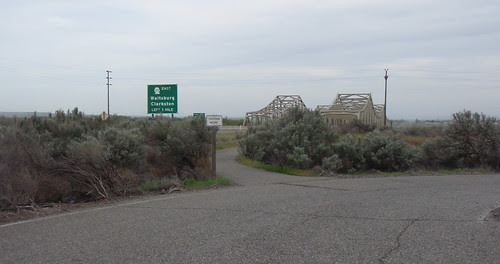 The ride sets out from Richland, and in short order you're cycling by the Columbia River, and then over the river on the Cable Bridge. The next short stretch is a desultory tour of Pasco. It ends and you cross the snake river and into Burbank. The scenery starts to pick up again after the control, and then there's a long stretch w/ limited services from Burbank to Prescott and then Waitsburg.

It's easy (in a car) to miss the Bolles turn off of the highway to Waitsburg. Catch the turn to get off the highway, and then a right-turn into downtown Waitsburg. Enjoy the town. Stop at the store to get your card signed, and continue South.

Right out of town is the right turn onto Middle Waitsburg Drive. A local cyclist encountered on the pre-drive gave it a thumbs-up - a great ride "if you like hills". It's hilly enough. And then you're in Walla Walla. A sequence of right turns places you at the outstanding Pioneer Park for an information control, restrooms etc. Leave the park the way you entered (construction on the south side) and take Alder to 9th. Hang a left. There's services all over the town - and in Milton-Freewater just to the South.

It's a decent stretch from Milton-Freewater to Pendleton. If it's windy you'll be exposed there, so ride in groups. Good looking shoulders on the road. It's a sharp descent into Pendleton. If you follow the Hwy 30 signs you'll work your way through town just fine. It'll take you by the place of the Roundup, and plenty of place to stop and eat/refill-bottles. This highway takes you into the Pendleton/Reith/Echo canyon. Then Stanton, Hermiston, Umatilla.

Cross the Columbia and prepare to Climb about 1200 rolling vertical feet. When you crest, you'll see the lights of the tri-cities. It's a dark descent from the top of Clodfelter into town. Once you've crossed over the bridge over the interstate, start braking to shed speed quickly - the left turn onto Leslie is easy to miss. After the turn onto Leslie - coast down that hill to the stop sign by the Shell Station. Don't stop there - you're ~2 miles from the end. Cross the intersection. You'll then have a stretch of fresh pavement before getting one last coasting opportunity into the finish.
Assorted pictures are here.
Posted by Paul Whitney at 10:38 PM 1 comment:

The pre-ride for the 200km resulted in only minor changes in the route, due to construction in Prosser. The route sheet indicates the needed changes (and fixes a typo or two) as a result.

The pre-ride started (w/ Coffee) at the Albertson's Express at Leslie and Gage in Richland. Coffee in hand, I set out along Keene road, making use of the bike path along that first part of the route. A few joggers out at 7:00am. The weather report had no hint of rain, and whatever winds there were promised to be mild. Made it to Benton City in easy time - and began the process of explaining route cards to the local shopkeepers. The control in Benton City is a Conoco with a tag-name of "The Taco Maker". I opted for the starbucks double-shot instead. Heading on out through Benton City - it's worth noting a well-kept portable toilet near the skate park, on the right, just before turning left onto the Old Inland Empire Hwy (often marked "O I E" on road signs).

The O I E was fine, as always. Worth noting a gang-of-4 dogs about 12km along that road. They bark, they're untethered, they'll approach from the North. Not sure how serious they are. Anyway, the scenery is great and some outstanding views of the river are available. There's no control in Prosser; but, there are services. The restroom at Farrand Park is open and (the men's at least) was clean. Byron Road parallels the river for a few miles, and is a very nice part of this route.

Once out on Hwy-22, heading towards Mabton, I got increasingly good views of Mt Adams and Rainier. The Texaco at Mabton is very busy and well stocked. The porto-toilet is truly disgusting. Recommend holding it till Toppenish.

Various wild-life sightings along the route, notably coyote, heron, hawks. Domesticated animal sightings include cows, sheep, llama, mules and dogs. Not sure if the cats seen were feral or otherwise. 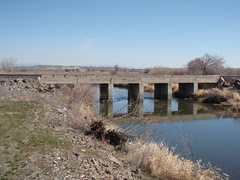 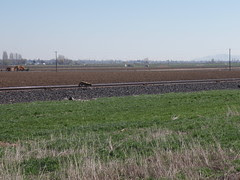 The weather was clear enough to provide views of Mt Adams and Rainier. There's still snow on some of the ridges along the Horse Heaven Hills. Then, you get to turn off of Hwy 22 and bike along the RR tracks. A note on traffic - there wasn't much at all on Hwy 22. Along Track Road, there was some. I pulled over once to let a trailer by, and got a friendly wave as result. Drivers were near-uniformly careful with me out on these roads.

Toppenish is a busy, active and working town on a Saturday morning. There was some sort of livestock auction in progress. And a large collection of yard-sales. Seemed like a nice town. I had some navigation uncertainties through Toppenish; but, managed fine. Will attach this map to the cue sheet:

One leaves Toppenish heading straight north on Hwy22/Buena road. This was a well-trafficked road, but, again, no real problems. At the stop sign of this road and the Yakima Valley hwy is the Golden Nugget store - our next control. And then, it's virtually the Yakima Valley Hwy/Wine Country Rd all the Way to Prosser. 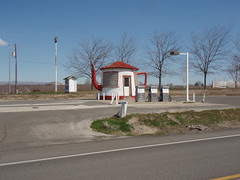 From the Prosser control (take your choice among the options near the Rest Stop), it's almost a straight reverse-ride home. A great ride - hope to see you there.
Posted by Paul Whitney at 1:20 PM No comments:

Ride: Desert River 300km
Organizer: Paul Whitney - post questions to this blog
Ride Date: Saturday May 2, 2009.
Start time: 6:00am, Registration - 5:30-5:55am.
Start/End Location: Intersection of Leslie and Gage, in the Parking lot between Albertsons and Albertsons Express, in Richland, WA. Here.
Finish by: 2:00am May 3
Registration: Pre-register here. Check here to see who all has registered.
Entry fee: $5 (+ $5 for non-RUSA members). Checks should be payable to "Oregon Randonneurs", also, Oregon Randonneurs membership is required for this event. You can download a membership form and bring it with you.
Medals: Available directly from the RUSA online store.
Route Sheet: The draft route sheet is here.

Ride Finish: The finish will be un-staffed. The Albertsons is open 24 hours - and so can certify your card. The Albertsons express is open fairly late as well. Be sure and complete your card (sign it, address, answer the question for the information control). Then, put the card into the car with the bike-picture on the window. I'll have the car in the lot at the start of the ride as well - so you can see where it is parked and what it looks like. Bring a pencil or pen - for completing you card and for the information control.

This route heads toward the Blue Mountains - getting close (Waitsburg) but not quite. We then head south, and get a chance to admire the excellent Pioneer Park in Walla Walla. Further south is Pendleton, and then we head through the Umatilla river canyon from Reith to Echo. From there, it's a nearly straight North ride back to the start - heading through Hermiston, Umatilla, Plymouth, over the ridge and back down to the city lights of Richland. The pre-drive note provides more details. It looks like it will be a great route.

The ride is unsupported, except for some drinks and snacks at the beginning. There are plenty of services, great scenery and some lightly trafficked roads. The approximate elevation gain (and loss) for this route is ~2500meters.

It's likely that the ride will finish in the dark - bring lights and reflective gear accordingly. Headlight, taillight, reflective vest or sash and reflective ankle bands are Randonnear USA requirements, not to mention extremely useful, for night riding.

The approximate route is shown in the map below:

Ride: Desert River 200km
Organizer: Paul Whitney - post questions to this blog post. Register here: http://www.orrandonneurs.org/brevets/brevet_reg.html.
Ride Date: Saturday April 18, 2009.
Start time: 7:00am, Registration - 6:00-6:45am
Start/End Location: Intersection of Leslie and Gage, in the Parking lot between Albertsons and Albertsons Express, in Richland, WA. See below for a detailed view of the start/finish.
Finish by: 8:30pm April 18, 2009
Entry fee: $5 (+ 5$ for non-RUSA members). Checks should be payable to "Oregon Randonneurs", also, Oregon Randonneurs membership is required for this event. You can download a membership form and bring it with you.
Medals: Available directly from the RUSA online store.
Route Sheet: The draft route sheet is here

Description: This ride explores the Yakima Valley region. It heads out from Richland directly to Benton City, Prosser, Mabton, Toppenish, Zillah and then back on the other side of the Yakima River via Sunnyside, Grandview, and Prosser. From Prosser, the ride backtracks via Benton City to Richland. A preview of the ride is available below, both out and back.

If you're coming in from out of town - The Richland Days Inn is a nice inexpensive hotel within a short drive (and about a 25 minute ride) from the start. This map shows the results from a search of hotels near the ride start:

The start/finish location is shown here:

Brevets in the Tri-Cities

For more information on Brevet's in the US see the RUSA web-site: www.rusa.org

Thanks to the Oregon Randonneurs for helping get these started in this region.
Posted by Paul Whitney at 8:08 PM 2 comments: